May 14, 2021 in Announcements, Board of Trustees, Commencement, News, President Faison 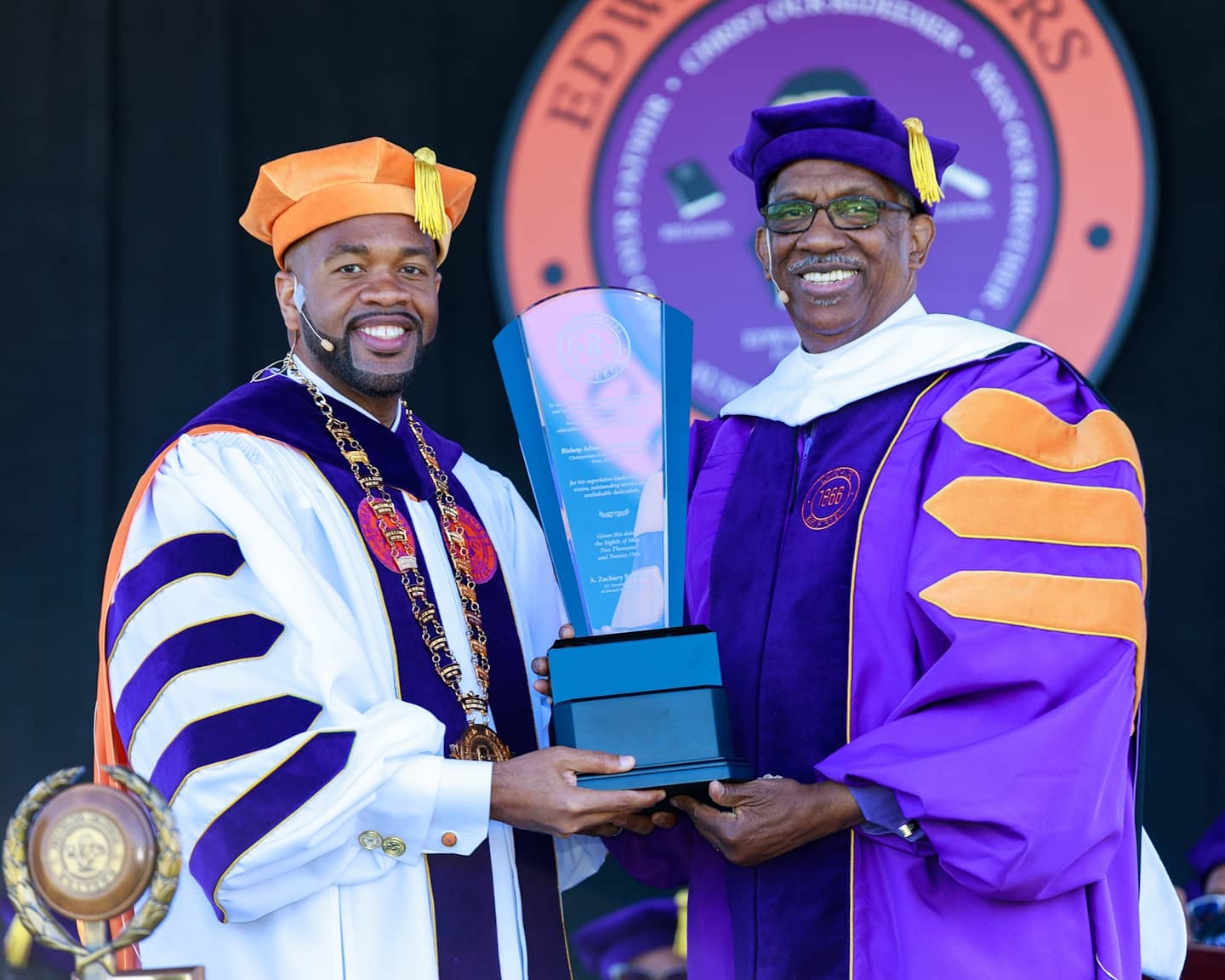 JACKSONVILLE, Florida — Edward Waters College hosted its first large formal event since the pandemic when 134 graduates received their diplomas at the 151st Commencement held on Saturday, May 8, 2021. The celebration also marked the first time the new Community Field and Stadium was formally used where graduates and guests were masked and socially distanced. 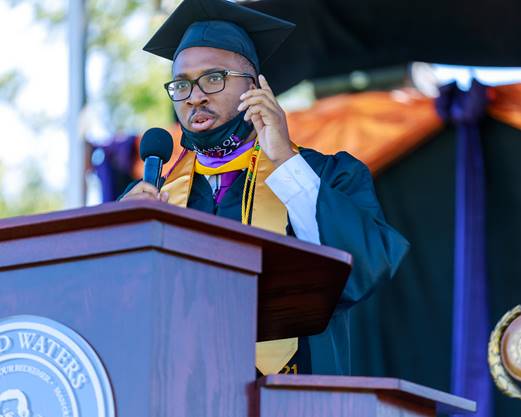 President Faison presented Bishop Adam J. Richardon with an honorary doctor of letters degree, a notable gift from the Edward Waters College Board of Trustees, and a special award from the academic community of Edward Waters College faculty, staff and students. Bishop Richardson has served as Board chair since 2012.

A sampling of institutional accomplishments during Bishop Richardson’s tenure as chairman include the following:

Many affiliated with Edward Waters College, including President Faison, herald Bishop Richardson as an outstanding leader who worked tirelessly to ensure the institution, Florida’s first independent institution of higher education and first HBCU, establishes and maintains a good reputation while becoming top-notch. Bishop Richardson will be stepping down later this summer marking the end of nine years of superlative leadership. 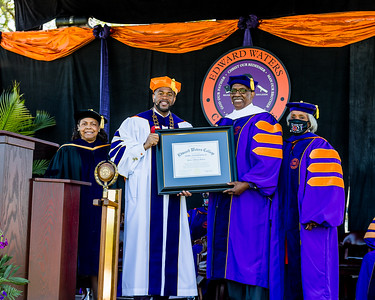 “Edward Waters College would not be held in the high regard it is today without the superb leadership of Bishop Adam Jefferson Richardson, Jr.,” Faison said. “Bishop Richardson has served as Chairman of Edward Waters College’s Board of Trustees since 2012 and shepherded the College through some tough times while positively changing the institution’s trajectory.”

“I was humbled in 2018 when Bishop Richardson and the EWC Board extended to me the distinct honor of becoming president of this esteemed institution,” Faison continued. “I have thoroughly enjoyed serving under Bishop Richardson’s leadership and will miss our regular counsel. However, I know he will live on in my heart, as well as the hearts of Edward Waters’ students, faculty, staff and other constituents forever.”

“Reading has to be a daily habit,” Bishop Richardson said. “Reading makes one ready. You can’t spell ready without spelling read.” Bishop Richardson invoked both the apostle Paul and the Rev. Dr. Martin Luther King, Jr. to stress the importance of love. And he told the graduates that “apathy about voting is a return to bondage and a shameless disregard to the holy sacrifice of those who heroically gave the gift of blood for the right to vote.”

For many in attendance, Commencement 2021 represented their first time hearing Bishop Richardson speak. Others, like Dr. Freddie Groomes-McLendon, know him well and have heard him impart wisdom throughout the years.

Dr. Groomes-McLendon, Trustees first vice chair, can’t say enough about the man who she knows in many capacities.

“I have had the pleasure of knowing Bishop Richardson as my minister, my bishop and as Chairman of the Edward Waters College Board of Trustees, and he has consistently demonstrated stellar leadership in all of these positions,” Dr. McLendon said. “He is a man of great wisdom and vision for the future, he is a most articulate and great preacher and he’s sensitive to the needs of others and committed to making this world a better place.”

“Bishop Richardson provided exceptional leadership to the EWC Trustees Board in support of the administration’s efforts to move … towards university status,” Dr. McLendon said. “He exhibits love for family and is loved and supported in return. He’s a man whose life is a reflection and testimony of servant leadership.” 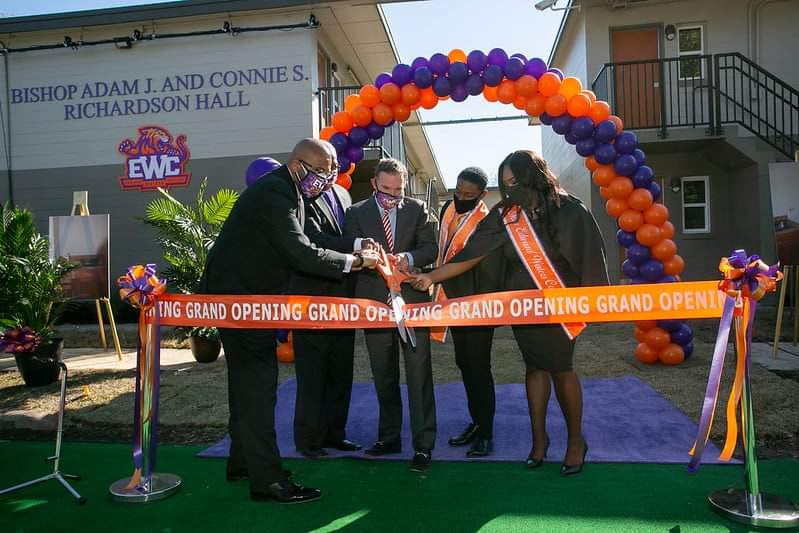 Bishop Richardson will long be remembered at Edward Waters College, not only for his leadership, but also because of the multimillion dollar renovation of the former Tiger Landing Residence Hall which was renamed the Bishop Adam J. and Connie S. Richardson Hall. The 176-bed residence hall with a computer lab, lounge, study areas and high-speed internet, was dedicated with a ribbon cutting ceremony was held in late January, 2021. This is the largest student residence facility on the campus of Edward Waters College.

Trustee R.B. Holmes said it is only fitting that an EWC residence hall is named for Bishop Richardson, whose hiring of Faison and other efforts led to stark campus improvements and more opportunities for the institution’s nearly 1,000 students.

“Bishop Richardson has successfully and skillfully guided, led and directed EWC in some of the most challenging times,” Holmes said. “His superb leadership has placed EWC on a strong academic and financial infrastructure that has become a positive model for HBCUs, in specific, as well as other colleges and universities. It was his steadfast leadership that cleared the way for hiring an extraordinary leader in President and CEO Dr. A. Zachary Faison, Jr.”

Born in Clearwater and raised in Tampa, Bishop Richardson earned his bachelor’s degree from Florida Agricultural and Mechanical University (FAMU) in 1969, where he was head drum major of the famed Marching 100 Band. He earned his Master of Divinity from Turner Theological Seminary at the Interdenominational Theological Center (ITC) in Atlanta and his Doctor of Sacred Theology at ITC through Atlanta Theological Association.

Bishop Richardson has taught at ITC and Morris Brown College in Atlanta, and as an adjunct professor at FAMU. He served at five Georgia churches before being assigned to Bethel AME in Tallahassee, where he spent nearly two decades. And in 1994, he was cited by Tallahassee Magazineas one of the most influential people in that city — at that time — in the past 15 years.

Once elected and consecrated the 115th Bishop in the African Methodist Episcopal Church in 1996 in Louisville, Kentucky, Bishop Richardson was assigned to the 14th Episcopal District, which includes six countries in West Africa. In the 2000-2004 quadrennial, he served as chair of the Lay Commission and as a member of the World Methodist Council. He has twice chaired the Health Commission and twice served as the chair of the Commission on Seminaries, Universities, Colleges and Schools. 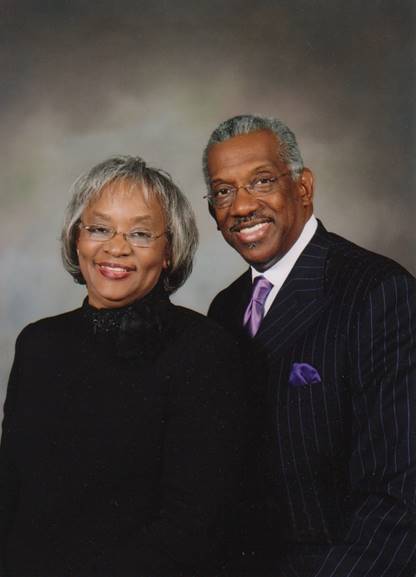 Bishop Richardson served as President of the Council of Bishops and as the Presiding Bishop of the 19th Episcopal District with headquarters in Johannesburg, South Africa. In 2004, he served as the presiding bishop of the Second Episcopal District, which includes North Carolina, Virginia, Maryland and Washington, D.C. For eight years, the Second District experienced phenomenal growth in membership, educational support and other areas. Bishop Richardson and his wife took great pride in the District’s embrace of ministries to youth and young adults. Undoubtedly, a pinnacle of Bishop Richardson’s ministerial career came in 2019 when he became the senior bishop of the African Methodist Episcopal (AME) Church.

Added Faison: “American author, speaker and pastor John C. Maxwell famously said, ‘The measure of a leader is not the number of people who serve him but the number of people he serves.’ Bishop Richardson has been a true leader, and I know the entire Edward Waters College family joins me in thanking him for his immeasurable service to our institution and wishing him godspeed in his future endeavors.” 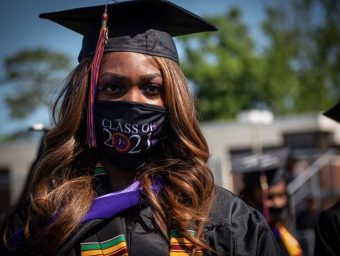 Graduates and guests were masked and socially distanced 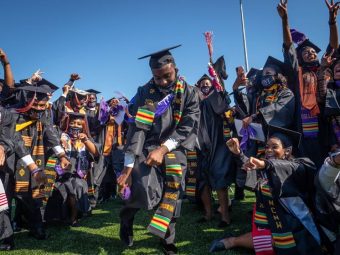 Graduates celebrate at the Commencement Ceremony 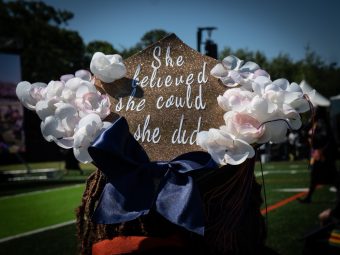 One graduate celebrating in her own way 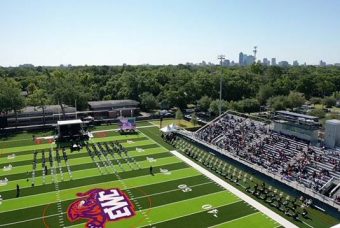 Edward Waters College (EWC), accredited by the Southern Association of Colleges and Schools Commission on Colleges (SACSCOC) and a member of the United Negro College Fund (UNCF), is a private, historically black, urban college which offers a liberal arts education with a strong emphasis on the Christian principles of high moral and spiritual values. EWC was established in 1866 and is an African Methodist Episcopal Church-related institution of learning. It is the oldest private institution of higher education in the State of Florida. 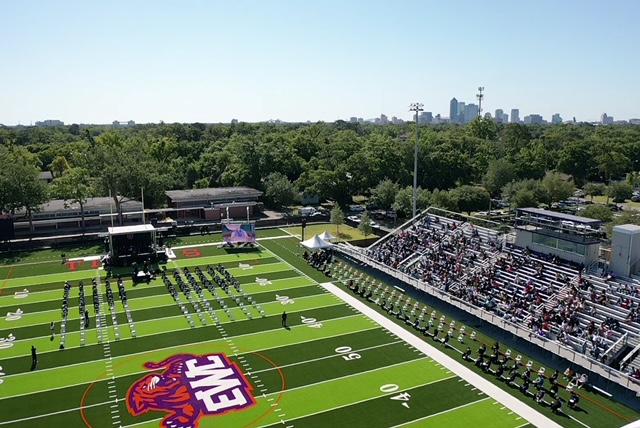 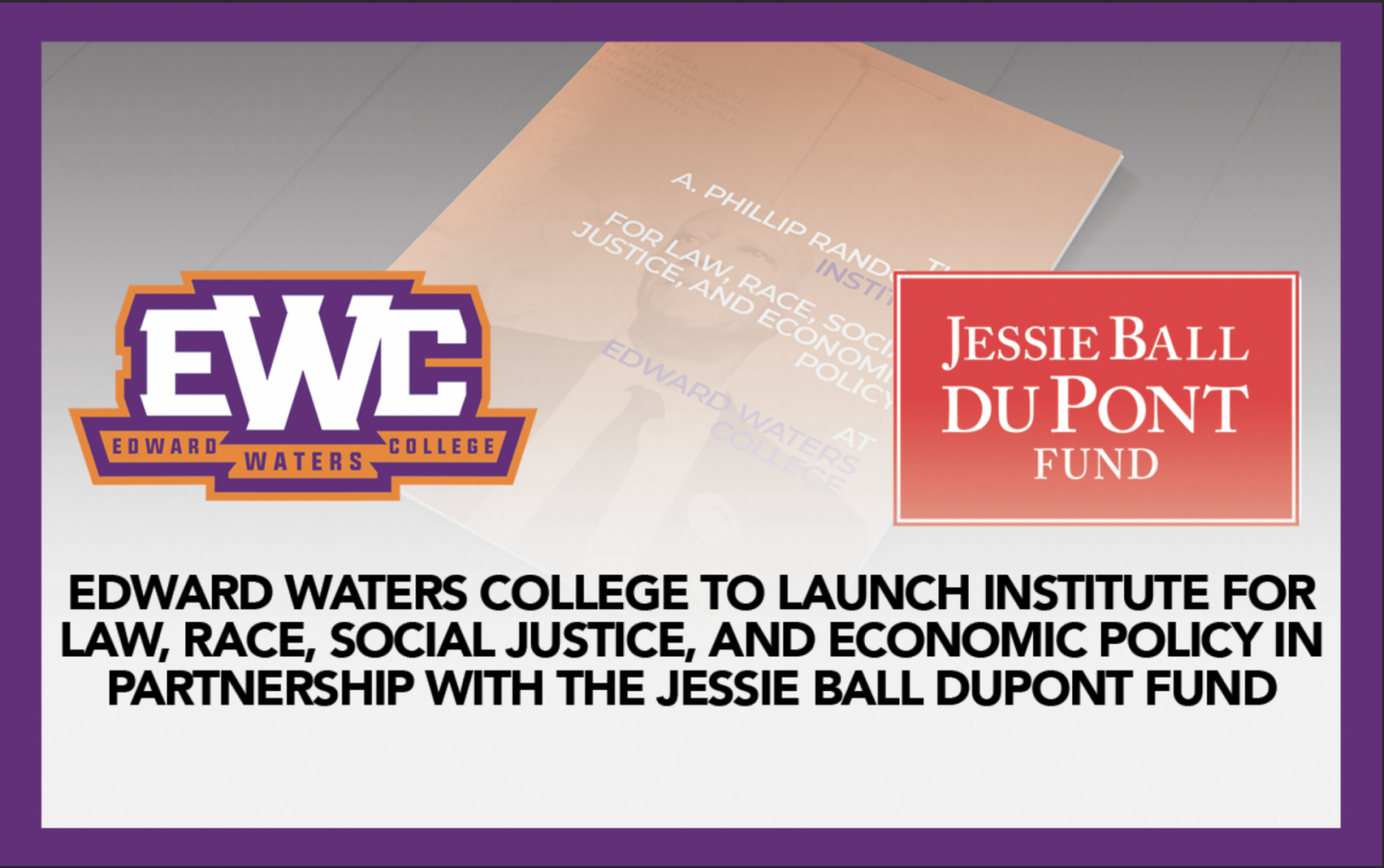