JACKSONVILLE, FL. (August 3, 2018) – Having earned a distinctive reputation as a scholar-educator, a distinguished academician, and an accomplished higher education administrator, Dr. Monique L. Akassi has accepted an appointment as Associate Provost for Faculty Affairs at Edward Waters College (EWC).

Dr. Akassi will begin her tenure, effective August 6, 2018, and will provide leadership in support of the Office of the Provost and particularly its ongoing and continuous collaborative engagement with the college’s faculty. She will serve as a champion for the training and advancement of faculty throughout the college and will support the Provost in the achievement of the goals of the Division of Academic Affairs.

Dr. Akassi will be expected to broadly influence the direction of faculty and Academic Affairs by leading and coordinating college-wide practices and policies associated with faculty work and Academic Affairs in general. Prior to joining the College, Dr. Akassi served in various faculty leadership roles, most recently as an Associate Professor of English and Chair of the Department of Languages and Literature at Virginia Union University, where she also served as a faculty senate officer. Prior to Virginia Union, Dr. Akassi served as an Assistant Professor of English and Director of the University Writing Center at Morgan State University after having served as a member of the faculty at Bowie State University where she founded the Africana Critical Composition & Rhetoric Association (ACCRA) and the Undergraduate Research & Writing Across the Curriculum Conference.  She has received various administrative and academic appointments throughout her higher education career and is a widely-published literary scholar, bringing critical research along with her varied publication experiences as the author/editor of seven books and two academic journals, including her latest publication with Cambridge, W.E.B. Du Bois and The Africana Rhetoric of Dealienation with a foreword written by Mr. Arthur McFarlane II, great grandson of W.E.B. Du Bois.

“I am eager and inspired to work in support of the continued scholarly achievements of the accomplished faculty and higher education professionals at EWC,” said Akassi “It is truly exciting to join the EWC community at such an evolutionary time, and I am convinced that EWC is poised to reach unprecedented academic prominence led by Provost Oliver and under the dynamic and visionary leadership of President Faison.

Akassi is married to Dr. Clément A. Akassi who is an Associate Professor of Spanish & French, and Director of Graduate Studies in the Department of World Languages and Cultures at Howard University. They have one son, Amaré, who enjoys mathematics, reading, writing and basketball. 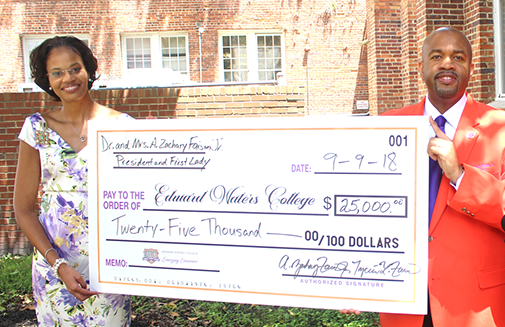